“Bob illustrates his teaching with examples from his own nationally accepted work and commmunicates in a clear and understandable fashion, to a class including students with limited English proficiency… He is sensitive to the uniqueness of Samoa and its people……”

Training for international broadcasters in: 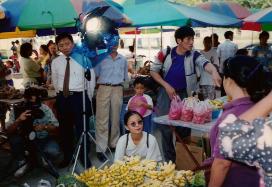 Conflict: The Role of Media

Use of Multiple Sources

Short programs for international broadcast professionals visiting the United States to provide an introduction to US broadcast organizations including Public (PBS) and commercial television.

Programs for Colleges and Universities

University courses in all aspects of film and television production and consultation services in the development of broadcast production curricula or tracks.

Courses at the undergraduate, graduate or professional level in media law, international peacebuilding and the media, communications and ethnic conflict, terrorism and the media.

Terrorism and the Media